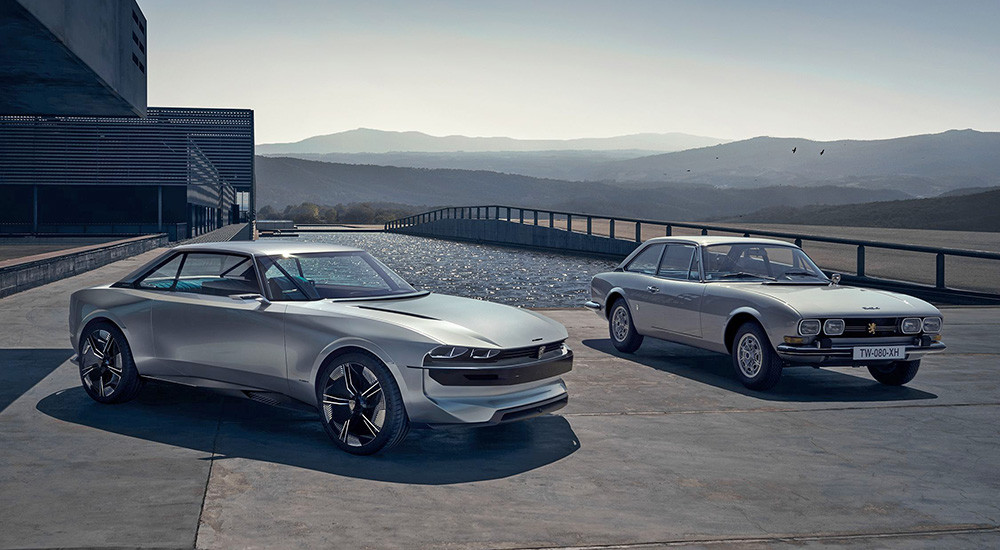 Concept cars can be pure hot air, with little to no use to us drivers than giving car manufacturers' design teams something to do rather than twiddle their pencils. But not all of them. Some - the best in fact - give us a peek into what is planned from a company, in terms of design, tech, or both.

We all like a concept car. Some are wacky and clearly never going to be made, but others give a glimpse into what a firm is going to be doing in the future. With electric cars at the forefront of most manufacturers’ plans, it’s clear that EV concepts are crucial forecasters of what we can expect in the next few years. We take a look at some of the best to go on display. Here’s hoping they make the jump to full-production. 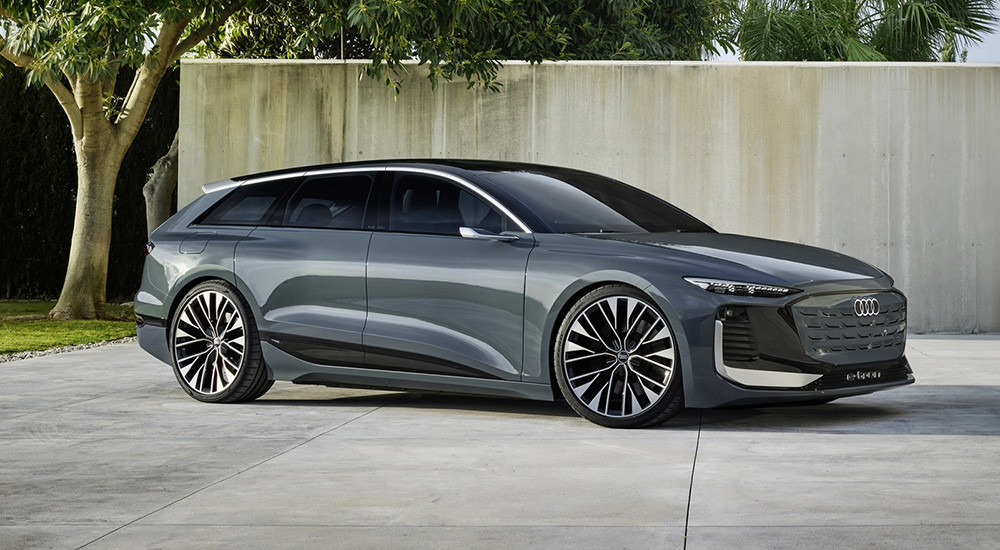 If nothing else, there is a dearth of electric estate cars on the market, so that should make the Audi A6 Avant e-tron interesting enough. Throw in the fact that Audi’s projected specifications for the A6 Avant e-tron would put it firmly in RS6 Avant territory - one of the most capable all-rounders on the market today - and the electric version looks promising indeed. 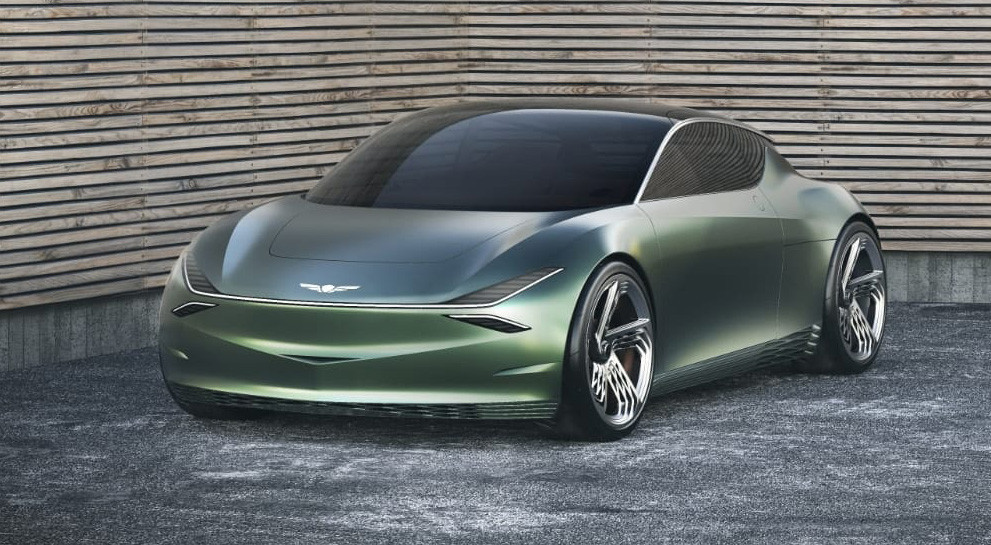 Although unlikely to go into production - more’s the pity - the Genesis Mint Concept did give us hints at the GV60 crossover that is now available. The concept was a compact two-seater designed for urban driving primarily, but with sporty intentions and some long-range potential.

A high-density battery allows for a range of around 200 miles on a charge, and Genesis reckons that 350 kW DC charging would be possible if made, which would see very short charging times for what would clearly be a moderately-sized battery. The interior is high-class and minimalist, which only goes to strengthen the feeling that Genesis should bring the Mint Concept to market. 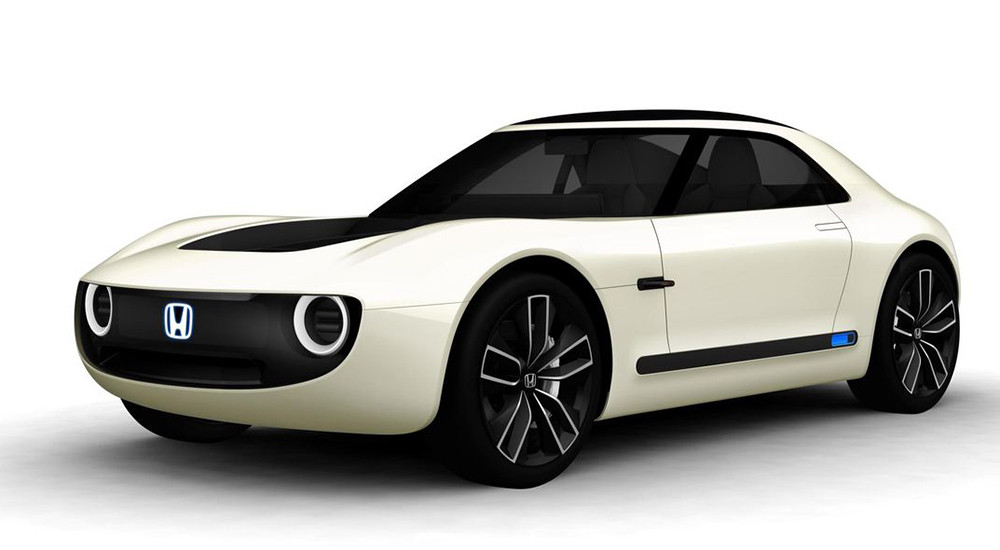 What’s most annoying about this concept is that the Urban EV Concept that was developed at a similar time, around five years ago, made it into production as the Honda e. Surely Honda can do the same with the brilliant-looking Sports EV Concept. (Though to be fair, it may well be bringing it to production in the next few years.)

Using a similar powertrain to the Honda e, the Sports EV Concept has a compact 35.5 kWh battery and around 150hp to play with, going through the rear wheels. It’s an electric challenger to the likes of the Mazda MX-5 then, and could be brilliant fun - the Honda e is after all. 100 kW DC charging allows for fast top-ups to the projected 150 mile range. 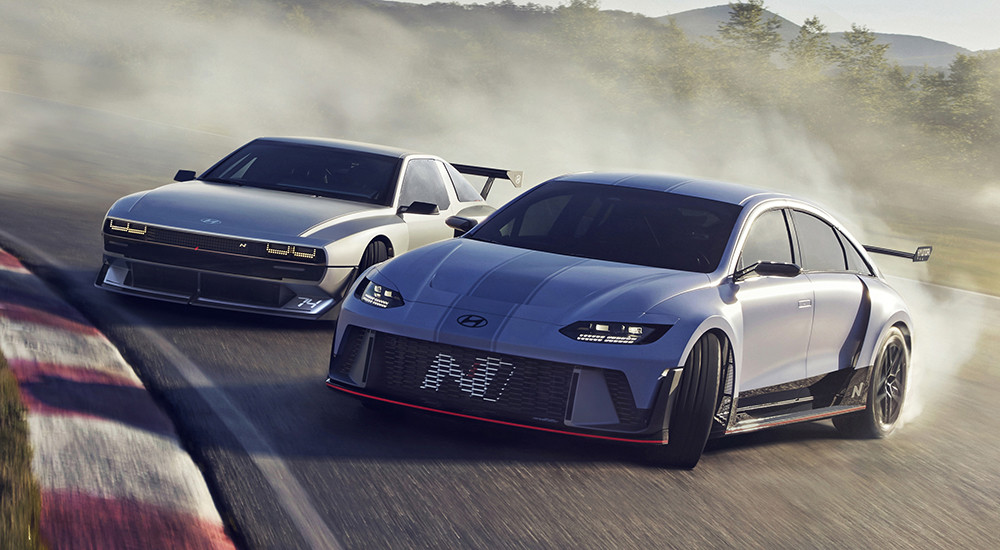 No sooner had Hyundai - which has quite the form in recent years for turning concept cars into reality - announced that the new Ioniq 6 streamlined saloon would go into production, it then also announced that it has built a concept car from that confirmed model.

The RN22e is an Ioniq 6 fettled with by Hyundai’s N Division, with the in-house performance arm using a 160 kW motor on the front axle and 270 kW rear motor for 430 kW combined all-wheel drive. A 77.4 kWh battery allows for a decent range - approaching 300 miles in all likelihood - and 800V charging means 10-80% charging takes less than 18 minutes. It’s quick, and not just in a straight line if Hyundai N has anything to do with it. Expect to see a (slightly) toned down version coming in as a performance Ioniq 6 in due course. 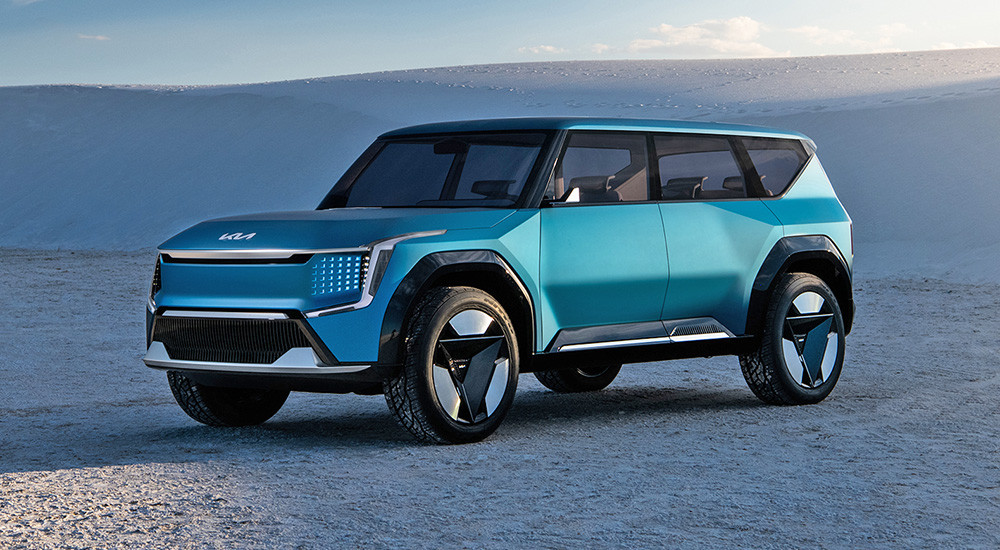 While the Honda above is compact, and the Hyundai sleek, the Kia EV9 Concept is neither. But it looks awesome. Designed for the US market primarily, the EV9 has a huge amount of space inside thanks to the opened-up packaging available with EVs.

Set to go into production as a seven-seat SUV, the EV9 is due next year, and will share the latest-generation 800V systems of the latest Hyundai/Kia EVs. This will allow for all-wheel drive, significant power options, ultra-fast recharging times, and a long range that will see at least a 77.4 kWh battery fitted. 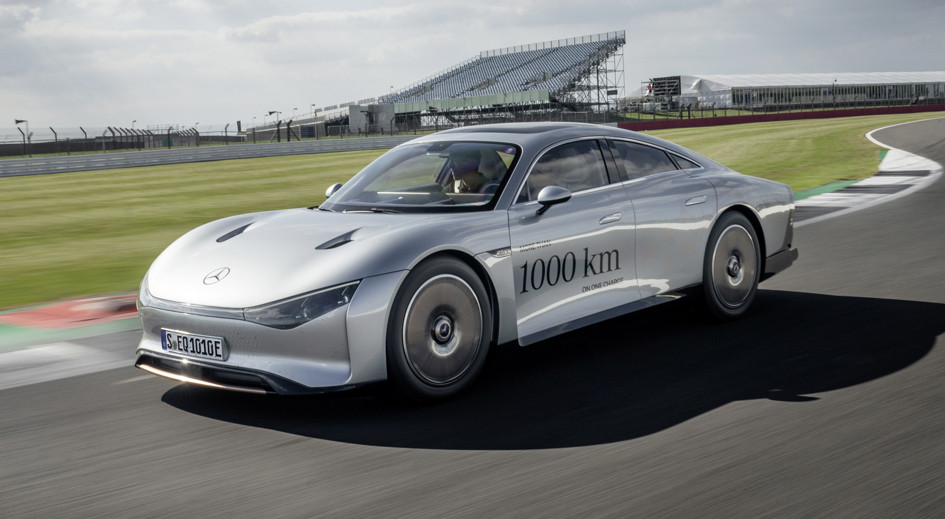 Of all the concepts on this list, the EQXX is closest to being an actual production car. The reason for this is because it is a working-prototype, and has set two long-distance EV driving records on public roads already for the Stuttgart marque.

Initially travelling 626 miles from Stuttgart to Cassis - on public roads and crossing the Alps - on a single charge, the Vision EQXX has topped that further by completing a 747 mile trip from its German base to Silverstone in the UK, again on public roads. Allowing this is a 100 kWh battery, very slippery shape, and modest top speed of 87mph. There have actually been petitions started to get Peugeot to make this. And that’s because the e-Legend looks just so right. Influenced by the very pretty 504 coupe of the late 60s, the e-Legend is a very modern affair.

Powered by 340 kW’s worth of electric motors, backed by a 100 kWh battery, the e-Legend has a range of 373 miles on a charge, with more than 300 available again after 25 minutes’ charging. The interior is a blend of classic and ultra-modern, with beautiful design touches everywhere. 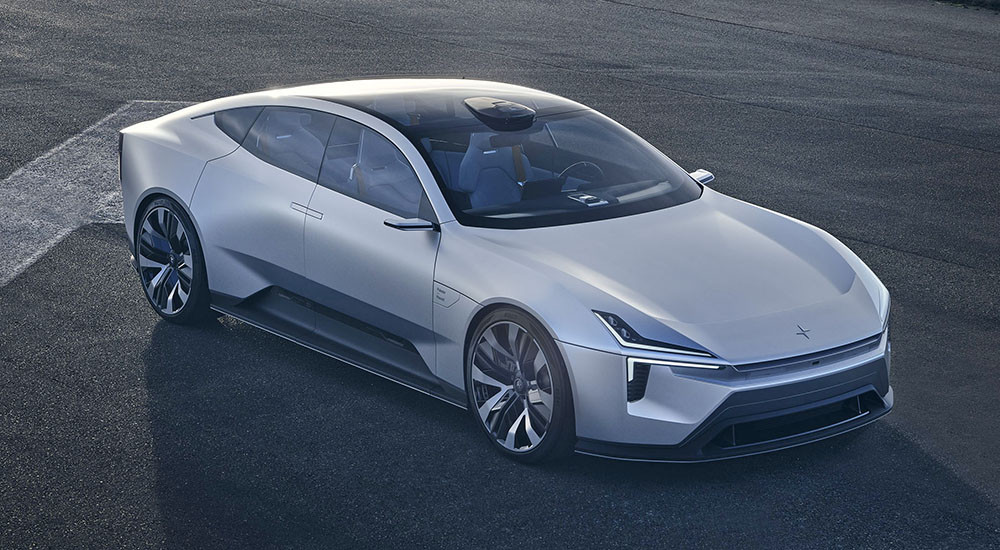 The Polestar Precept is a stylish four-door GT car, and the good news is that it will arrive in 2024 as the Polestar 5. If camouflaged prototypes are anything to go by, it should largely look like the concept - which is great news.

The Precept has a focus on interior comfort, and intuitive and safe design of functions. Expected to be powered by around 450 kW of electric motors and a 103 kWh battery, performance will trouble supercars, and range will be in excess of 300 miles on a charge. Looking forward to this actually arriving. 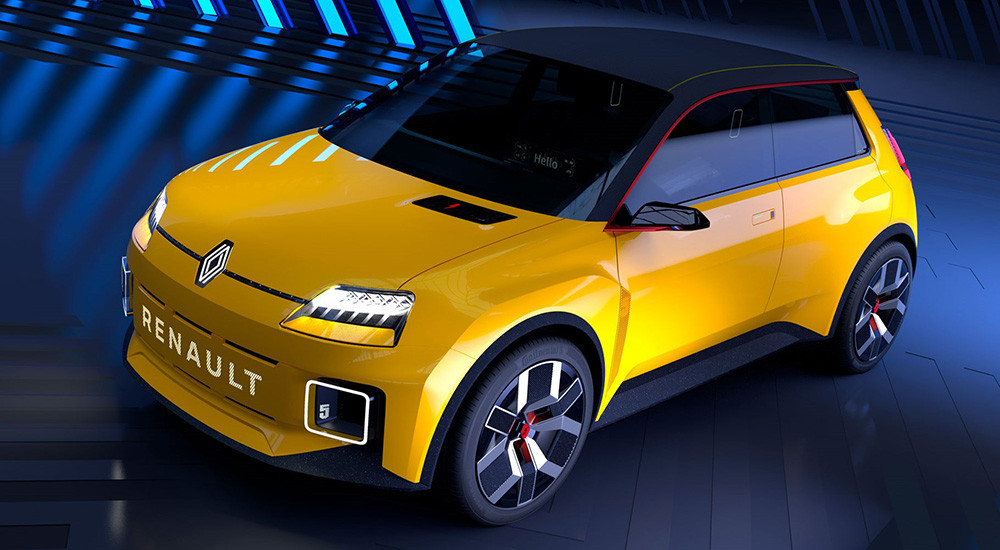 The Renault 5 returns, and what a return the French firm has given it. Retro-ish in style, the 5 has enough nods to the past model to make a clear link, but it’s a very modern affair. The supermini is reborn as an all-electric model.

Confirmed for production in 2024, the Renault 5 will use a new electric platform and renewed battery technology to see a significant price cut over the current Zoe electric supermini. Despite that, the range will be close to 250 miles on a charge. 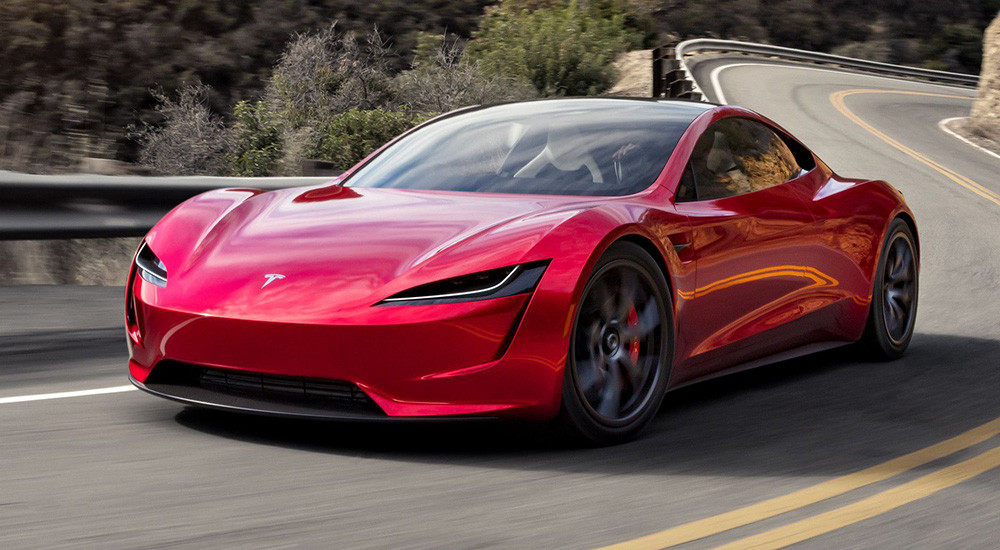 Confirmed for production, but we know not when - as is often the case with Tesla. However, the second-generation Roadster certainly looks like it will be worth the wait. Pitched as the quickest car in the world, Tesla is projecting a 1.9 second 0-60mph time and 250+mph top speed.

On top of that, the range will be 620 miles on a charge, and the Roadster will feature a targa roof for top-down motoring. But this is no two-seater supercar - the Roadster can seat four, and its low profile suits the Tesla house style.