YPS Insight: What are the UK’s largest EV charging networks? 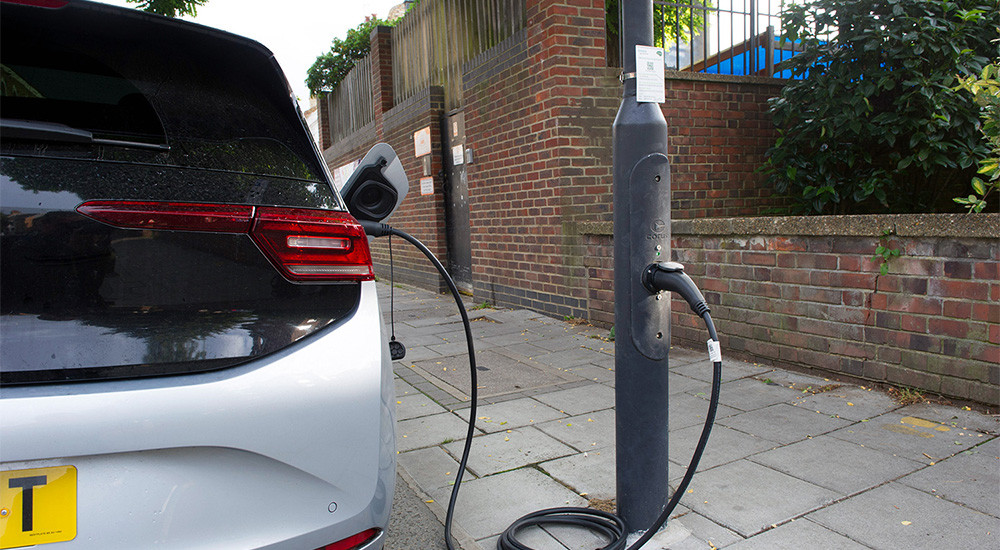 We are all familiar with the major fuel companies, with names emblazoned across forecourts as we stop to put in petrol or diesel. Shell, BP, Esso etc are household names, but what are the largest UK public EV charging networks?

YourParkingSpace takes a look at those networks that are currently the largest, plus those that we expect are going to become prominent players over the next few years.

All statistics come from Zap-Map.com, and information is correct as of the end of April 2022. Charge point numbers are subject to change rapidly. 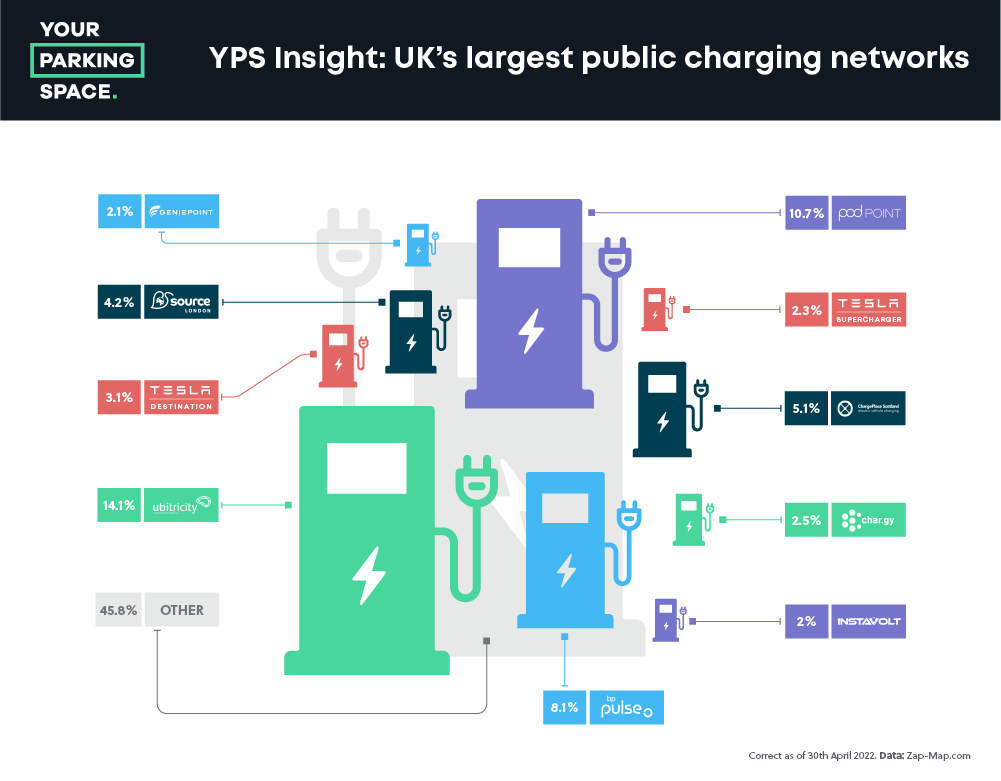 The UK’s largest public charging network in terms of charge point numbers is Ubitricity. This is not a familiar name to many, nor are the charge points particularly note-worthy when looking at them. But that is the point. Ubitricity manufacturers “normal” charge points for public, domestic, or commercial use, but one of the primary places its units are found is in lampposts.

By hiding charge points in existing street furniture, it means public on-street residential charging can be easily and cost effectively rolled out.

As such, although none of Ubitricity’s charge points will charge particularly quickly, there are more than 5,300 units on the network - largely across London and other cities - by May 2022.

A more “visible” network than Ubitricity is Pod Point, which not only installs domestic and commercial charge points, but is unusual in running its own network as well.

Pod Point has a large number of public fast charge points in car parks across the country, but has also worked with Lidl GB to install rapid charge points at plenty of the supermarket’s stores.

It’s biggest presence is with Tesco however which, alongside Volkswagen, has seen the installation of charge points - often fast units, though with some rapid points - at more than 500 stores.

The first “traditional” name to be found in the EV charging industry comes from BP with its Pulse network. Formerly Chargemaster’s Polar network, BP bought the company in 2018 and has focused on expanding the rapid charging provision in the company’s forecourts.

Offering ultra-rapid, rapid, and fast chargers across the UK, the BP Pulse network is one of the widest reaching infrastructures in the country, with more than 3,000 chargers.

As the name suggests, ChargePlace Scotland points are only found north of the border. The network is backed by the government, and rapidly rolled out EV charging infrastructure across Scotland - an impressive feat considering the largely rural areas of the country.

Almost 2,000 chargers can be found in the country, and for anyone driving an EV in Scotland - either residents or visiting - it’s a key network to register with for easy access.

Made up of the combined Supercharger and Destination networks, one of Tesla’s big selling points is the fact it supports its customers with proprietary charging networks.

The Destination network is aimed at the likes of restaurants and hotels, filling in gaps in Tesla’s UK charging map with almost 1,200 points, and proving useful for those stops where drivers will be stopped for a few hours or more. Destination points often have an open-access (non-Tesla specific) point installed too, and the Supercharger network is being trialled as an open network, though drivers will need a Type 2 or CCS inlet respectively to be able to use them.

Again, like ChargePlace Scotland above, Source London is a regional network, found in the UK’s capital. It’s largely covered by on-street fast charge points, with the aim being to help boost the number of electric vehicles on the road in London.

More than 1,500 charge points can be found, with pay-as-you-go or subscription models available. Focused within the M25, it’s a useful network for EV drivers in the area, with many streets featuring one or more chargers.

Like Ubitricity, Char.gy is perhaps one of the least visible networks that drivers will come across, and it’s for similar reasons. By fitting charging infrastructure to lampposts, bollards, and other units, Char.gy points are easy to walk past without noticing.

Equally, they are crucial for on-street residential charging, that is a major restriction in the uptake of electric vehicles for those that have no off-street parking. With almost 1,000 points, Char.gy is helping tackle that issue.

GeniePoint is a rapid-charger focused network, which teamed up with Morrisons early on to roll-out charge points across a wide number of the supermarket’s superstores.

In doing this, the network helped fill in some major gaps in the UK’s charging map early on, and continues to provide the lone rapid point in certain towns.

One of the UK’s largest rapid-only networks, InstaVolt was an early player in easy-to-access charge points. The network launched with contactless bank card access throughout, and has since added an app. But by being able to turn up at any InstaVolt point and tap a card to start/stop a charge was a big bonus, and one that certain other networks have had to catch up with.

With more than 750 chargers across the UK, InstaVolt often has two or more points in any one location, and has started expanding to include rapid charging hubs.

Charge Your Car was a very important network that has rapidly fallen away without investment or backing. The network was instrumental in the foundation of the UK’s public EV charging network, and was vital for any user in the early days of EVs.

However, having been initially set up to incorporate a number of regional networks founded with central government money, the network was bought by Chargemaster, which was in turn bought by BP. With BP focusing on its Pulse network, and the fixed term contracts of most regional networks coming to an end, the network has been broken up and picked up by various other providers.

Osprey is one of the main names to not appear on this list of top 10 public EV charging networks, narrowly missing out. The rapid-focused network is similar in principle to InstaVolt, offering reliable and easy to use points across the UK. In fact both regularly score highly on user surveys.

Gridserve’s Electric Highway is another major network, having taken over the Ecotricity Electric Highway, which had seen a lack of investment for years after proving a crucial part in the uptake of EVs. With chargers at just about every motorway and trunk road service station, the Electric Highway points have all been replaced with newer, faster, and more reliable units than can be accessed using contactless bank cards or app. The creation of “Electric Forecourts” is Gridserve’s take on a charging hub with the likes of Costa and WH Smiths available to look around or pick something up from while your EV charges.

Ionity is a pan-European netwoek established by car makers including BMW, Audi, Mercedes-Benz, Ford, Porsche, and VW, as later joined by Kia and Hyundai. Only located at motorway services and with high-power points, Ionity's network is the fastest around.

Finally Shell Recharge is similar to BP Pulse in the sense that it is backed by a major oil company. It is also expanding its network with a large number of ultra-rapid chargers to be found at Shell garages across the country, and many more points yet to come. In fact, Shel; has replaced one of its petrol forecourts with an eV charging hub in Fulham, switching the entire place to chargers rather than pumps.

Names for the future

Fastned isn’t a big name in the UK yet, but it will be. The network is huge in the Netherlands, and has expanded further afield in recent years. With an increasing number of its stylish, easy to find, and simple to use hubs, the network offers a variety of high-power and rapid charge points.

Also growing quickly, and having already established a good reputation among EV drivers is MFG’s EV Power network. Rolled out at the Motor Fuel Group’s sites are a number of high-power charging hubs.