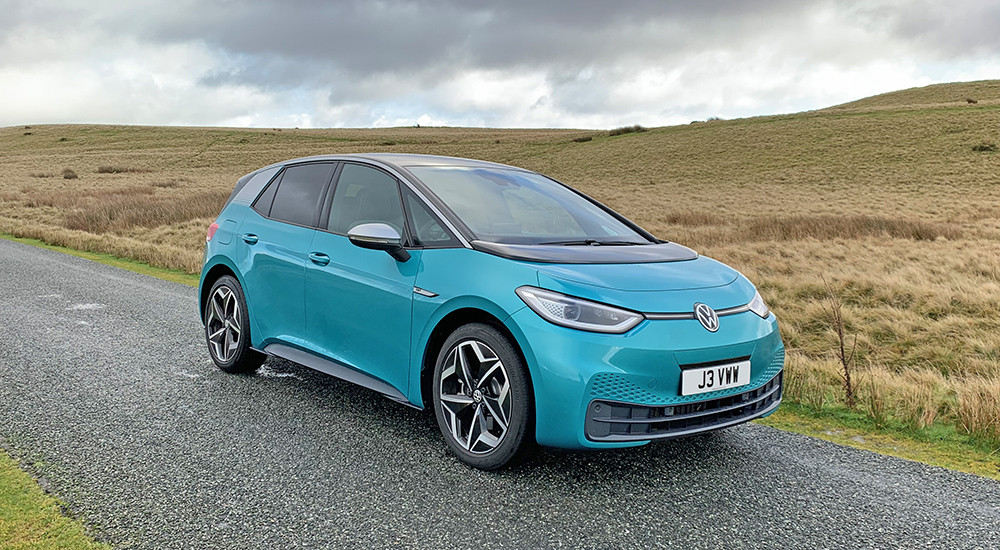 The electric car market has set new records in 2020, despite a difficult year for not just the automotive industry, but the country as a whole. The Society of Motor Manufacturers and Traders’ latest statistics, published today (Wednesday 6th December) show that electric cars outsold all other fuel types but petrol cars in December 2020.

Electric car registrations set a new outright total record in the final month of the year - though only just. The 21,914 pure-EVs registered in December 2020 is the highest number ever in a single month, narrowly beating the previous record of 21,903 set in September 2020.

This sees pure-electric registrations up 344% compared to December 2019, which at the time as regarded as a successful month’s EV sales. Its pure-EV registrations of just shy of 5,000 units is dwarfed by this year’s statistics, and even the combined PHEV and pure-EV figure from Dec 2019 is only just ahead of this year’s PHEV December figures. 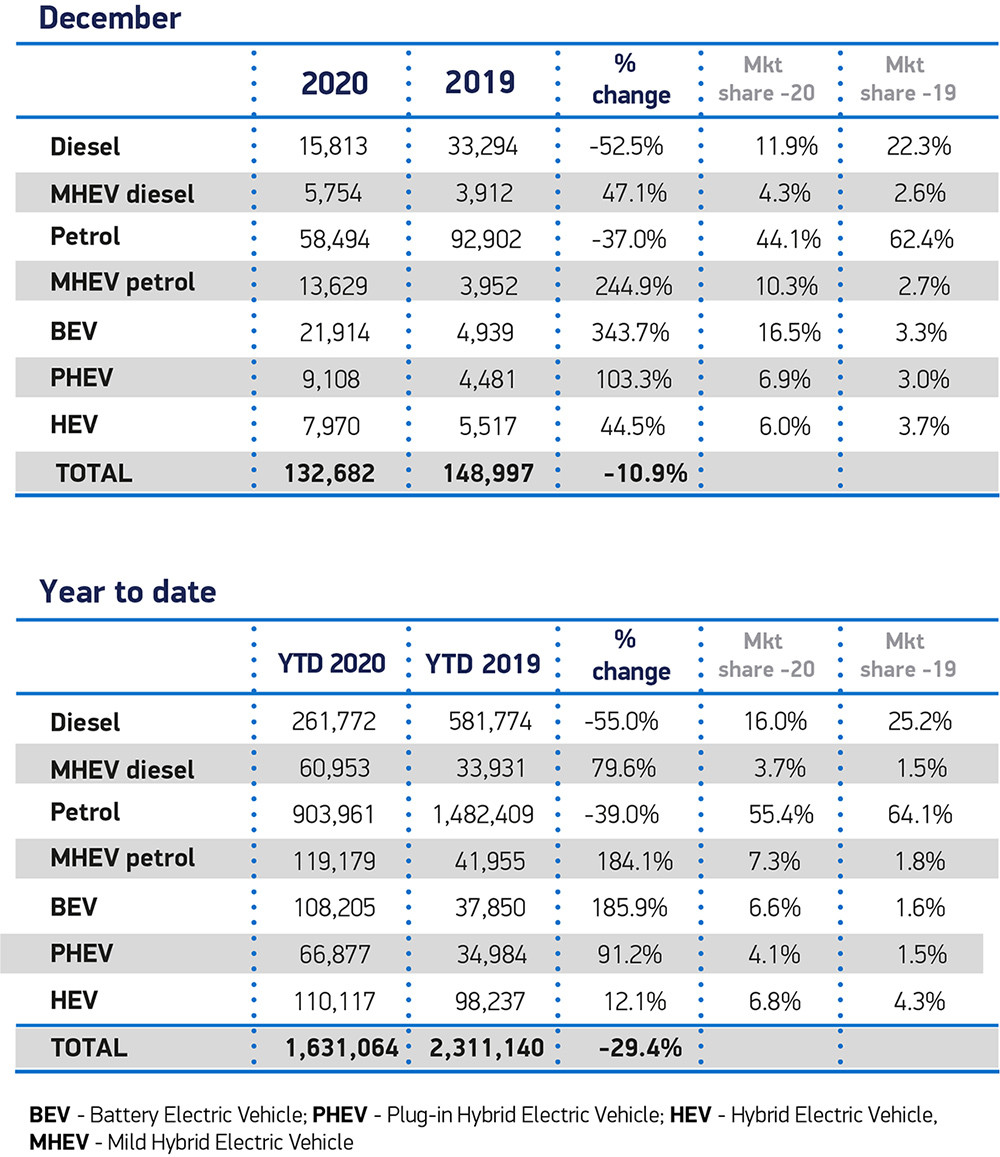 Combined electric car registrations - EV & PHEV - market share in December 20 was 23.4% of all new cars sold. With almost one in four new cars sold in December able to be plugged-in shows just how strongly the EV market has finished the year.

All this is against a backdrop of a month where total sales dropped 11% compared to Dec 19. Even combining diesel and mild-hybrid diesel sales, the pure-electric registrations still beat the figure, with 21,567 diesel-powered cars compared to pure-EV’s 21,914.

Usually we don't find out how electric car models are faring until quarterly statistics come out, a quarter behind the one we are in, from the Department for Transport. However, the SMMT publishes the top 10 best-selling models for the month and the year to date with its monthly data.

The table-topping Tesla Model 3 is pure-electric only, as is the VW ID.3 in 4th spot in December's table. The VW Golf, Vauxhall Corsa (6th), Volvo XC40 (7th), Mercedes Benz A-Class (8th), and Mini (10th) are all available in plug-in variants as well - the Corsa and Mini as pure-EVs, and the others as PHEVs. Some of these plug-in registrations would be accounted for in those best-selling models. 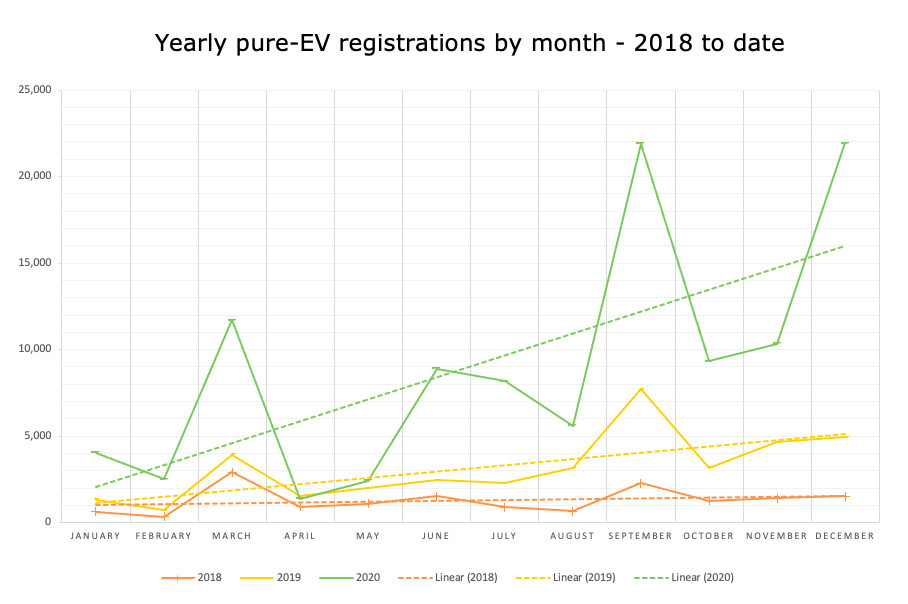 It was clear early on in the year that 2020 was always going to struggle in terms of car sales. The uncertainty regarding Brexit - with an EU trade deal only agreed in the closing hours of the year - and the widespread increase in Covid-19 cases as early as February/March saw automotive manufacturers and the industry quickly reevaluate predicted sales.

As such, a near 30% drop in total registrations is not unexpected, but the electric car market has not shared much of that gloom. Diesel sales are 55% down on 2019’s total, petrol sales were down 39%, and when you combine diesel/mild-hybrid diesel and petrol/mild-hybrid petrol sales, the figures aren’t too different. Combined petrol registrations are down 33% on 2019, and combined diesel down 48%.

There are clearly a number of factors at play to see such a swing in internal combustin engine car sales dropping and plug-in car registrations increasing, but the fact remains that 2020 is the year the electric car really became mainstream. Market share for pure-EVs was only 0.2% behind that of hybrid models, and the trend is growing quickly. Add in PHEVs to the mix and the market share of 10.7% is not that far behind combined diesel share of 19.7%. The difference is that diesel sales are dropping quickly, and EVs - to put it simply - aren’t.

Increased options for electric cars - a number of important new EV models were launched in 2020 - is both a key indicator of a strengthening market and a reason for increasing sales. The good news is that 2021 looks set to build on what has been a highly successful 2020 for the electric car market.

New models from the likes of VW, Nissan, Fiat, and Ford - and a host more - look set bring more EVs to the mass-market buyer, and with plenty of options such as battery size, power, and driving range available within each model. No longer are buyers offered an EV and that’s about all the choice you got. Now buyers can pick their make, model, power etc, just like ‘normal’ cars

With the electric car market ending 2020 so strongly, even with a new lockdown coming into force at the beginning of the year, 2021 looks set to be a very bright one indeed for those involved in EVs.