News, Views & Insights/ Motoring/ EV vs PHEV; which is right for you?

EV vs PHEV; which is right for you? 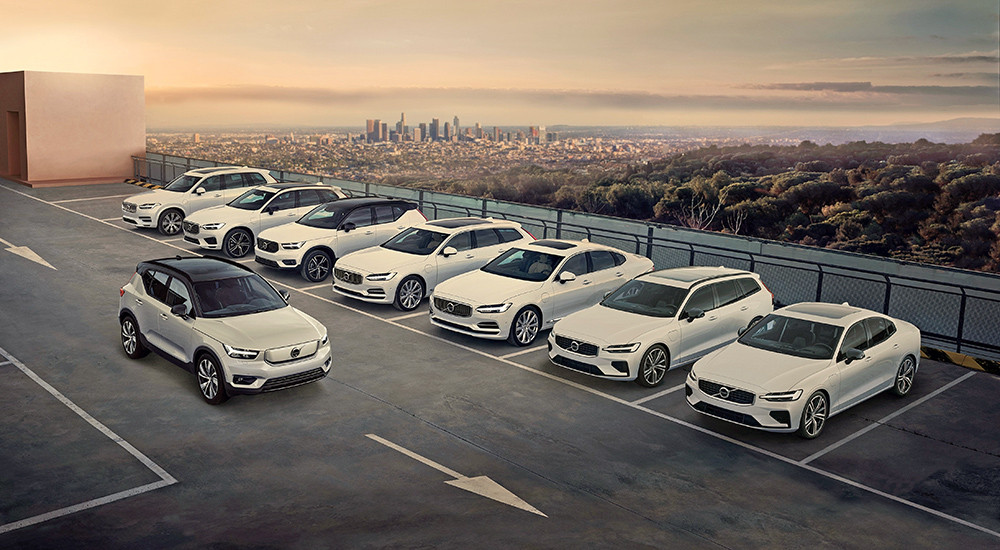 If you're looking to go electric for your next car, it can be a confusing world of acronyms, technology choices, and benefits for many. We highlight pure-electric and plug-in hybrid models, looking at what works well for each type of car.

There are two core types of electric vehicle - pure-electric (EV) and plug-in hybrid (PHEV). Other technologies exist in the electric vehicle market, but these two dominate over any other, and will be at least vaguely familiar to many.

But which is the best technology for you? Each has its benefits, and even the most hardened supporter of either will concede that there are negatives too. It all comes down to what’s best for each driver. We look at each type of vehicle, outlining the strengths and weaknesses of each.

How do electric vehicles work?

Electric vehicles are capable of being driven using an electric motor only for a reasonable distance. This ‘reasonable distance’ will vary in definition from person to person, but in UK terms, it’s anything over around 20 miles on a single charge.

Clearly a 20 mile electric range is not enough for a great many drivers, so there are two main ways to get around this. One is to provide a far greater electric-only range by adding a larger battery. This creates a pure-electric vehicle (BEV or in this case, EV).

The other main way to counter such a short range is to combine the electric motor with a conventional petrol or diesel engine - a PHEV). This allows for a 20-40 mile range on the electric motor (depending on model), plus often around 200-500 miles of range using the engine.

There are two other technology types, but these are far less common than pure-EVs and PHEVs. Hydrogen fuel cell vehicles (FCEVs) use an on-board fuel cell stack to convert hydrogen carried in tanks to electricity. These use an electric motor to power the car, with the only tailpipe emissions being water.

Extended range EVs (REX or EREV/REEVs) are also powered only by an electric motor and carry a large battery. However, they also have a compact engine, which never powers the wheels directly, instead acting as an on-board generator to top up the battery on the move. Although these technology types are found in vehicles, both are in such tiny numbers that we shall focus on pure-EV vs PHEV.

What are the benefits of EVs and PHEVs? 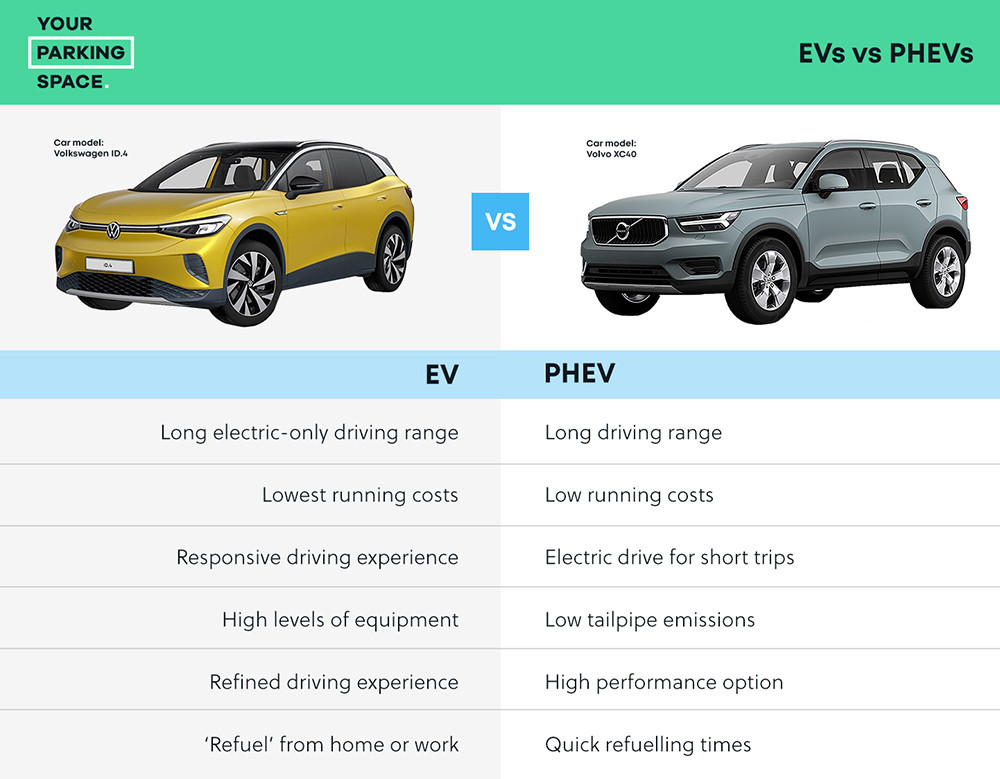 Benefits across all electric vehicles include reduced running costs and lessened environmental impact, particularly in terms of local air quality. Throttle response is usually good thanks to the electric motor’s natural characteristics when compared to an engine, and refinement tends to be a strength too, as electric motors are far quieter than internal combustion units.

To drive, both technology types will feel similar to a conventional automatic car in many respects. There are no gears to worry about - EVs tend to have a single ratio, whilst PHEVs often have a standard 6-8 speed automatic gearbox or a CVT. Either way, put the drive selector in ‘D’ and you can get going.

Both will have brake energy recuperation to a greater or lesser degree, which uses the energy that would otherwise be wasted under braking to help recharge the car’s battery and extending range. This happens either when the driver lifts off the throttle, or when actively braking.

By running on an electric motor, there are zero tailpipe emissions produced, which greatly benefits local air quality. There can be emissions produced up-stream at the point of electricity generation, though it is easy to opt into a green electricity tariff at home and the workplace, and most public charging networks are backed by 100% renewable electricity.

How do either hit the budget?

Pure-EVs tend to cost a little more to start with, but return the lowest running costs of any car on the road. With the ability to charge at low prices, or even nothing, pure-EVs immediately return significant savings in running costs. Add in the lowest company car tax BIK rates (1% for FY 21/22) and zero car tax (£0 VED), and things look better still. For many, leasing helps get around the higher upfront cost.

PHEVs can’t compete with pure-EVs in terms of running costs, but still offer lower figures than hybrids, petrols, or diesel vehicles. A typical PHEV will be charged around 11% BIK in company car tax, and benefit from a £10 reduction in car tax. What’s essential to remember is that PHEVs work at their best when charged as often as possible. Leave one without a charge for a large amount of time, and you’re effectively running a heavier, more complicated hybrid rather than a PHEV, and drivers won’t see the same benefits as they could.

Which is best - EV or PHEV?

That greatly depends on what’s required. What can be said is that pure-EVs are often a better fit than many drivers might expect. Driving ranges are longer than some will imagine - often 200-300+ miles on a single charge - and equally, many prospective drivers think they need more range than they do. The UK’s average daily driving distance is less than 20 miles after all.

Should a pure-EV not be for you however, a PHEV can offer a great alternative to get into an electric vehicle, whilst retaining the support of a conventional engine.

Pure-EVs take a relatively long time to recharge. The fastest will add 100+ miles of range in less than 10 minutes, but this is restricted to some of the most expensive models currently, and only on the fastest charge points.

Most EVs will take around half an hour to an hour to top-up on the public recharging network. It’s still not a long time, but far longer than the five minutes it takes to pump petrol into a tank. That said, if a driver is sitting at 70mph on a motorway for three hours, they will have covered 210 miles. By that time, they really should have had a break which can be spent charging - ‘losing’ little to no time at all.

For some though, the requirement to wait half an hour or more every few hours simply isn’t possible, often due to the need to cover long distances for work. This is where PHEVs come in, with the ability to cover many trips under electric power, and longer distances with petrol or diesel power.

What should be made clear is that there are both petrol-PHEVs and diesel-PHEVs available. Whilst diesel power has plummeted in terms of popularity, its ability to cover long distances economically remains a big benefit. As such, for those that spend much of their day on the motorway, a diesel-PHEV could be a good pick.

The rest will likely be better off with a petrol-PHEV, particularly with incoming restrictions regarding the access to city centres and the like being placed on diesels. On top of that, a petrol-PHEV is as economical or better than a conventional diesel usually up until the 150 mile mark on a single trip, so still return excellent fuel economy.

Our advice? Take a good look at pure-electric models, as you are likely to surprise yourself as to what they can do and how they can fit into your life. Should it not look like a match, a PHEV is a great fall-back position, giving some of the benefits an EV can offer, with some it can’t too.