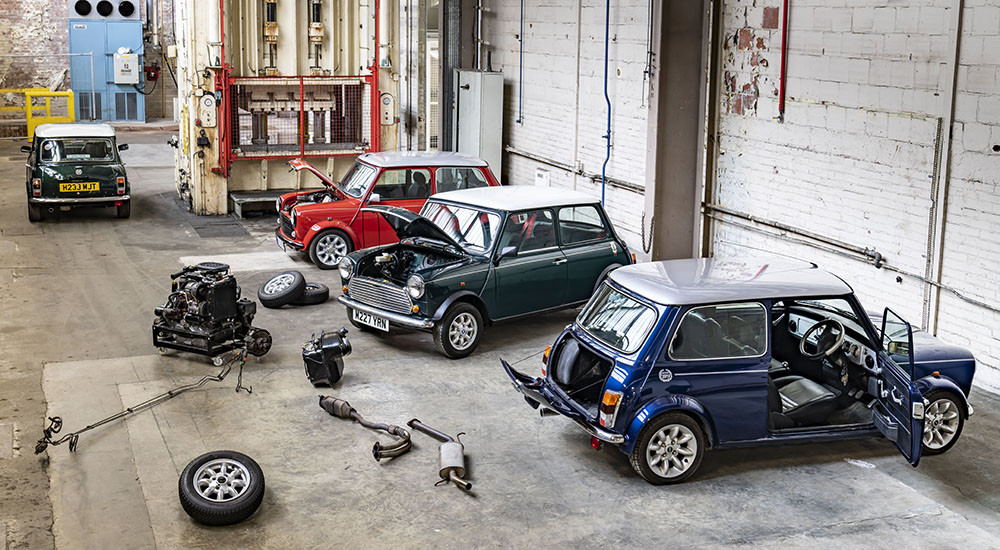 Mini has launched a new factory-supported electrification programme for owners of original-shape Minis, converting the classic models to pure-electric vehicles.

The background behind the conversion process has been developed by a team of workers at Mini's Oxford plant, in response to an electric Mini concept revealed before the full-production Mini Electric even went into production.

Pitched as a means to continue the classic model's legacy but in a more sustainable way, owners of original Mini models will be able to book their car in to have a factory-backed conversion.

Fitted will be a 90 kW electric motor (122hp), powered by an as yet undisclosed capacity battery. It will be relatively compact however, needing to fit in to the compact car's framework. A range of 99 miles on a charge has been revealed.

Charging is possible at up to 6.6 kW AC - no DC charging available - and the inlet is placed behind the original fuel cap. Information such as charge remaining has been built into the existing set of dials.

All modifications are reversible in case anyone should want to put the engine and transmission back in to return the car to its original state.

The modified Mini will not need to be reregistered, and will cost nothing to tax - if it's too new to not qualfy for classic car tax status - as well as being exempt from congestion and ultra low emission zone charges.

With fast charging and a relatively short range, the Mini is clearly intended for use as a local runabout, rather than a long-distance EV.

Mini has been careful to stress that the famous handling characteristics of the original Mini will be uncompromised.

Pricing is yet to be announced, though other conversion kits are available already for around £10,000 - though these do not come with factory backing.

Should the battery be compact enough, it will ensure good levels of efficiency, while also minimising evironmental impact - but this is somethiing that will only become cleare once all the details are released.