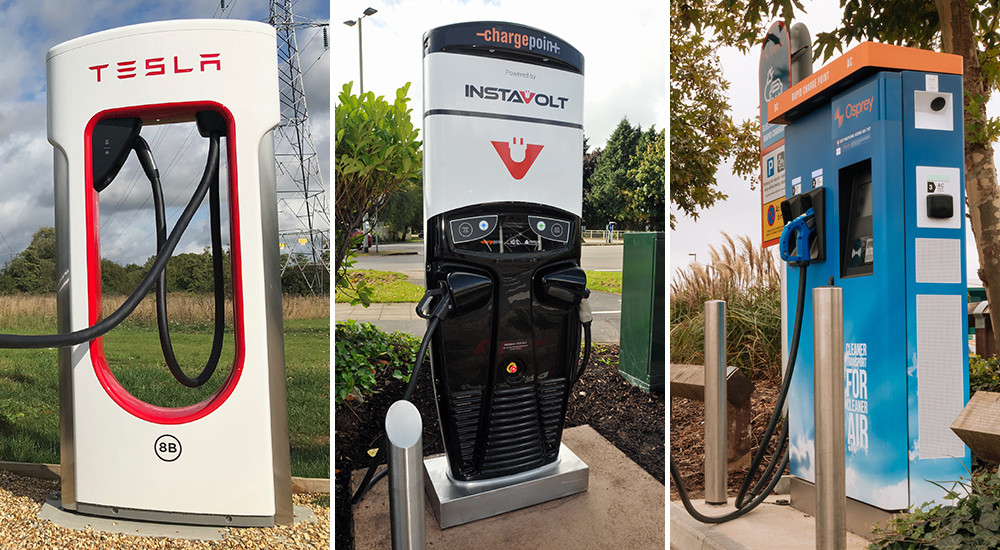 Zap-Map's annual survey shows that Tesla is the best network rated by EV drivers, though second-placed InstaVolt is best for those non-Tesla drivers.

Tesla is the UK’s number one EV charging network according to users of charge point mapping service Zap-Map, with InstaVolt the top open-access network.

Scoring 4.8 out of 5.0, Tesla’s Supercharger and Destination networks are rated number one by those able to use them. However, since only Tesla drivers can use the Supercharger network, and occasional Destination charge points, it is InstaVolt that scores highest for ‘all’ EV drivers.

The rapid-only network is available for any EV driver that has a DC charging inlet - CCS or CHAdeMO - with simple-to-use charge points, and contactless bank card access/payment.

Osprey - formerly Engenie - has come in third-spot overall (second for open-access) with similar principles to InstaVolt. Rapid-only points tend to offer a Type 2 access - either via a tethered AC connector or a socket - allowing all EVs to use them. Access is possible using a contactless bank card, or Osprey’s app, as well as access via Zap-Map’s payment service, Zap-Pay.

Tesla and InstaVolt remain in the spots they held in last year’s rankings, whilst BP Pulse - formerly BP Chargemaster’s Polar network - fell the furthest of those ranked in 2019’s, dropping from 5th to 13th. Conversely, Osprey has climbed the most, moving from 8th to 3rd.

Tesla’s combined network was rated at the maximum 5.0, with the Destination network dropping its combined score thanks to a 4.4 rating from EV drivers. With more than 560 Superchargers and over 1,100 Destination points, the wide-reaching networks were praised for their seamless access and competitive pricing.

InstaVolt has more than 460 rapid chargers in the UK, making it the third largest rapid network after Tesla and BP Pulse. It came top of the open-networks for both reliability and ease of use, with benefits including the fact there are often two or more charge points installed at each location, providing high levels of availability.

In last spot comes Ecotricity’s Electric Highway, the oft maligned network by regular EV drivers covering long trips. With a near-monopoly on motorway service sites, the network has been criticised for its reliability and ease of use. Despite having kickstarted the UK’s EV charging market, it is now out-of-date and unreliable according to many users.

Dr Ben Lane, co-founder and CTO at Zap-Map, said: "This year’s network rankings should focus the minds of all EV charging providers. As the survey demonstrates, EV drivers are very clear about the factors that make for a good charging experience, with reliability and ease of use being key priorities.

"A new generation of drivers want to arrive at a charge point and be confident that it will be simple to use and a trouble-free experience. They are quick to pick up that different networks offer varying levels of service, and will actively visit networks that provide a reliable and easy-to-use experience."

Ranked in 15th place, Charge Your Car (CYC) is being phased out as many of the contracts it won a number of years ago with local authorities have not been renewed. As such, this time next year may not see CYC ranked at all.

CYC's owner - BP Pulse - has recently undergone a rebrand, move to a new headquarters, and widespread roll-out of charge points. It is expected that it will climb back up the table after a busy 2020 made more turbulent by the impact of Covid-19.

Below, courtesy of Zap-Map, is the full table of networks, rankings, and scores out of five, rated in the latest survey by more than 1,500 Zap-Map users.