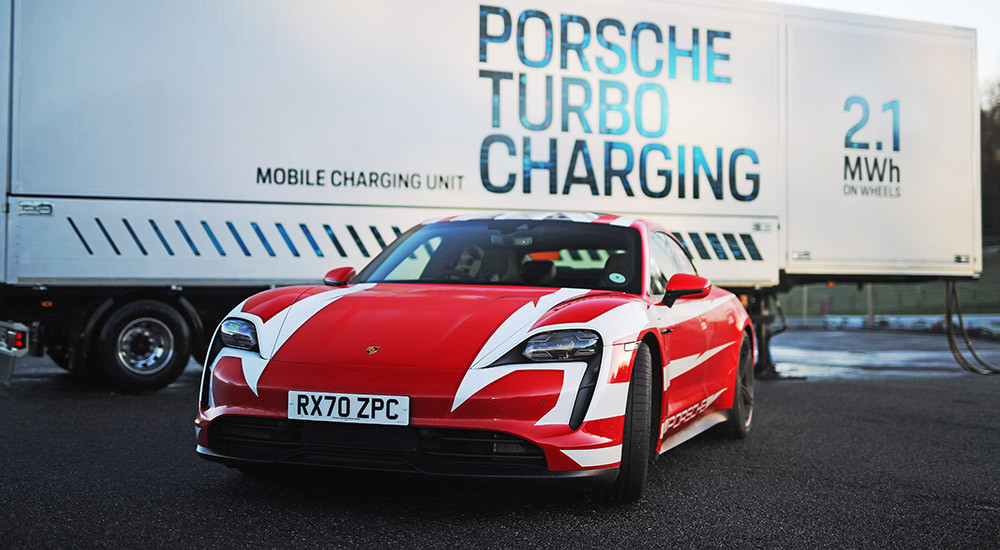 With any new technology, there will always be records broken. To start with, there are no existing records, so some have to be set, and then the rapid pace of development means that constant improvement pushes that envelope further and further. Electric cars are no different. 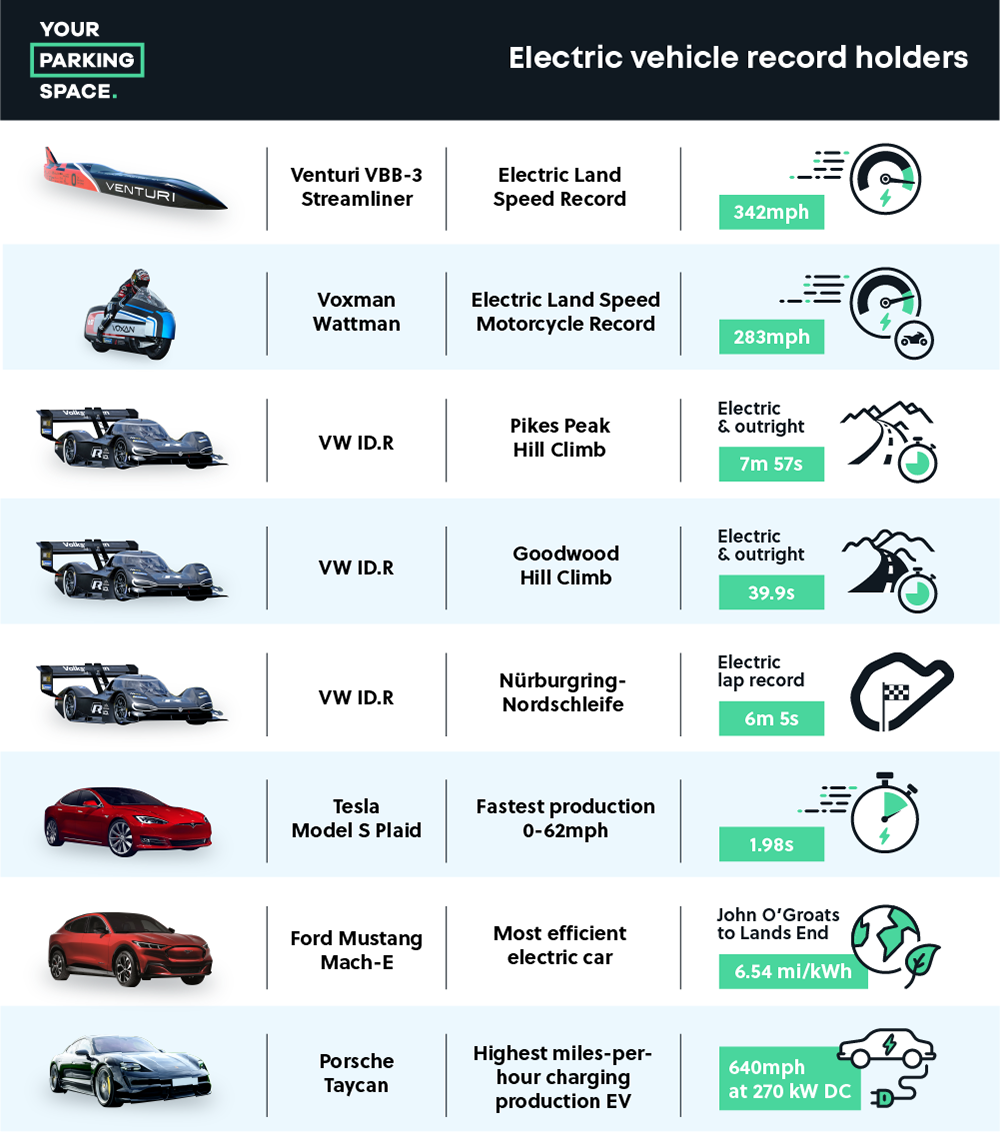 Although electric vehicles are nothing new - they were more developed at one stage than those using petrol engines - it is only in the past decade or so that electric cars have been focused on.

Improvements in battery and motor technology means that recent analysis by the Society of Motor Manufacturers and Traders (SMMT) has shown that average EV driving range has tripled in the last decade, from 74 miles to almost 260 miles on a charge. And it’s not just range that has progressed, but speed, efficiency, and performance in general.

We look at some of the key electric record breakers to have come along in the last few years, showing just what potential there is in the electric vehicle world.

When talk turns to record breakers, most turn their thoughts to outright top speed. The fastest car in the world currently is Thrust SSC, which was the first car to break the sound barrier and achieved 763mph in 1997. Both it, and the Bloodhound LSR that is aiming to take the record and break 1,000mph, are powered by jet engines however, so has an advantage over electric models… for now at least.

Until then, the current electric land speed record belongs to Venturi with the VBB-3 Streamliner, which has achieved 342mph over a mile timed course. It doesn’t look anything like as impressive as the Thrust SSC which is more than twice as fast, but attempts at land speed records in petrol and then jet powered cars have been going on for more than 100 years.

Powered by a motor producing more than 3,000hp is more than 11 meters long, and took the record at Bonneville Salt Flats in 2016.

It must be noted that an electric car called Little Giant from Team Vesco 444 reVolt Systems has run at 335mph, also at Bonneville, in 2021. However, World Land Speed Record rules dictate that any record must be set over an average speed of two runs in opposite directions within an hour of each other, and Little Giant didn’t run within the 60 minute window. As such, it holds the US national record, but not the world title.

If you think it may be scary piloting a car at more than 300mph on a dried out lake in Utah, spare a thought for those doing it on two wheels. The Electric Land Speed Motorcycle Record is held by the Voxman Wattman, which has been cleverly designed to hold three different class titles, including the outright record.

Former MotoGP and World Superbike rider Max Biaggi took the Wattman to a record speed of 283mph on the runway at the Kennedy Space Centre in Florida.

The team are aiming to break the next milestone at 300mph soon.

The Pikes Peak Hillclimb is a prestigious event in world motorracing, held at the top of a mountain where the higher the cars climb, the less oxygen there is for engines to use and thinner air for downforce. Except electric motors don’t need oxygen-rich air to create power.

As such, Volkswagen has created the ID.R as a high-performance showcase of what its electric developments can do. The all-electric prototype completed a tight, twisty, mountain-top 12.42 mile course in 7min 57.148sec, with driver Romain Dumas completing the 156 turns with an average speed of 90.538mph.

Dumas also reckons that the car has another ten seconds in it, but nailing all those turns and hairpins on a challenging course is almost impossible, but he was still happy to break the previous record by more than 16 seconds in a car that boasts 671bhp and weighs less than 1,100kg.

It showcases not just outright pace in a straight-line, but sustained power, and performance through the corners too.

The UK doesn’t have its own version of the Pikes Peak Hillclimb, though it does have a number of interesting and testing hillclimb courses. Arguably, thanks to the Festival of Speed, the most famous of which is Goodwood.

Again, the Volkswagen ID.R holds both the electric and outright records, with a time that is significantly shorter than the Pikes Peak record, set over a much shorter course at close to sea level.

When it comes to fearsome tests for cars and drivers, there are fewer more challenging than the infamous Nürburgring-Nordschleife. The Volkswagen ID.R has come and claimed the electric lap record here too, with a time of just over 6 minutes over the sweeping 12.9 mile circuit which covers 156 corners in a single lap and a number of long straights.

A different set-up than the Goodwood and Pikes Peak climbs means the ID.R was better suited to a lap run, and was again piloted by Dumas.

So far, we’ve only looked at specialist vehicles, built with the aim of breaking records - prototypes that can never be legally driven on the open road.

So now we go on to some production records, those held by cars that the public can go out and order or buy. Typically, Tesla holds at least one, in this case the fastest production sprint time, with a 0-62mph record of 1.98 seconds.

Electric cars again have a benefit over engine-powered vehicles here since response is instant with an electric motor.It has helped the Tesla Model S Plaid - a spacious, four-door saloon remember, not a supercar - take the current acceleration record.

Not all records are lined to high-performance. Instead, this one deals with the most efficient production electric car, currently held by the Ford Mustang Mach-E. It managed to cover 840 miles on public roads with just one stop for charging covering 6.5 miles per kWh in the process.

Theoretically, the 88 kWh battery in the Mustang Mach-E used has a range of 572 miles on a charge, well ahead of the official WLTP figure of 379 miles.

Mercedes-Benz has just set a new record for efficiency on public roads, driving its Vision EQXX prototype 1,000km (620 miles) across Europe on a single charge. This involved starting at Sindelfingen, close to Stuttgart in south west Germany, over the Swiss Alps and northern Italy to Cassis on the Cote d’Azur.

Not only where the roads being used by others, but it involved a lot of climbing over mountains, and the Mercedes completed the 12 hour trip with a record low score of 8.7 kWh per 100 km (62 miles). It also had more than 85 miles of range remaining when the trip was complete. The car was not production-ready however.

It’s not a common record to highlight, but the Porsche Taycan can add the most miles in a charge per hour, thanks to a combination of a long driving range and ultra-rapid charging capabilities.

Built on an 800V system, the Porsche Taycan can charge at up to 270 kW when on a high-power charger, and can go from 5% to 80% in around 20 minutes. This sees a “miles per hour” charging figure of 640mph, just ahead of the Audi e-tron GT. The Audi shares the same charging specification as the Porsche, but has a slightly lower range figure, so drops just behind the Taycan.

With an official range as high as just over 300 miles, it’s clear you couldn’t actually add 640 miles in an hour, but the theoretical speed at which the Taycan can charge is how this figure is calculated.