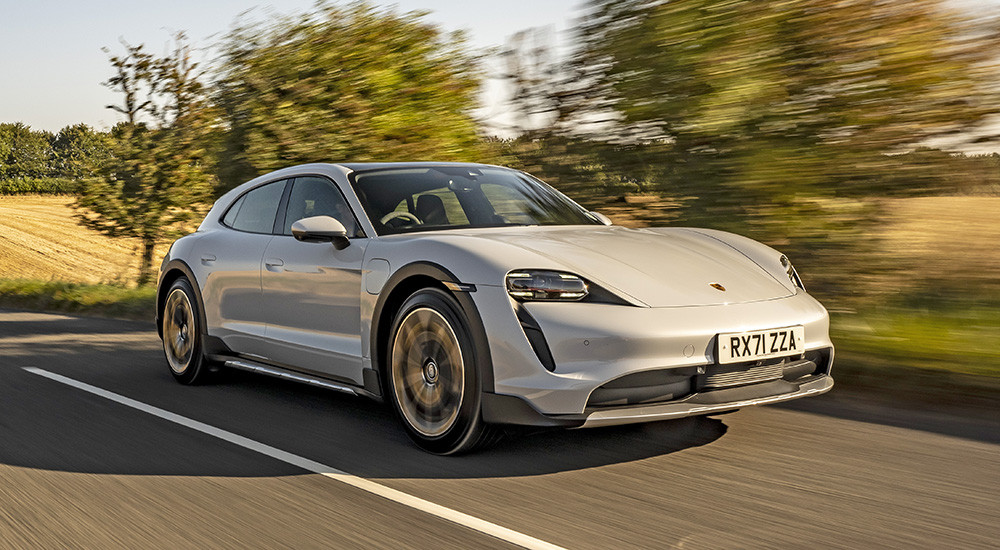 The UK’s electric vehicle market is growing quickly, but what are the best selling makes and models?

YourParkingSpace has looked dived into the vehicle registration figures published each quarter by the Department for Transport, which breaks down all models that are on the road during each three months of the year.

We look at the key pure-electric, plug-in hybrid, and hydrogen fuel cell vehicles to discover the best-selling makes, models, and manuacturing groups. 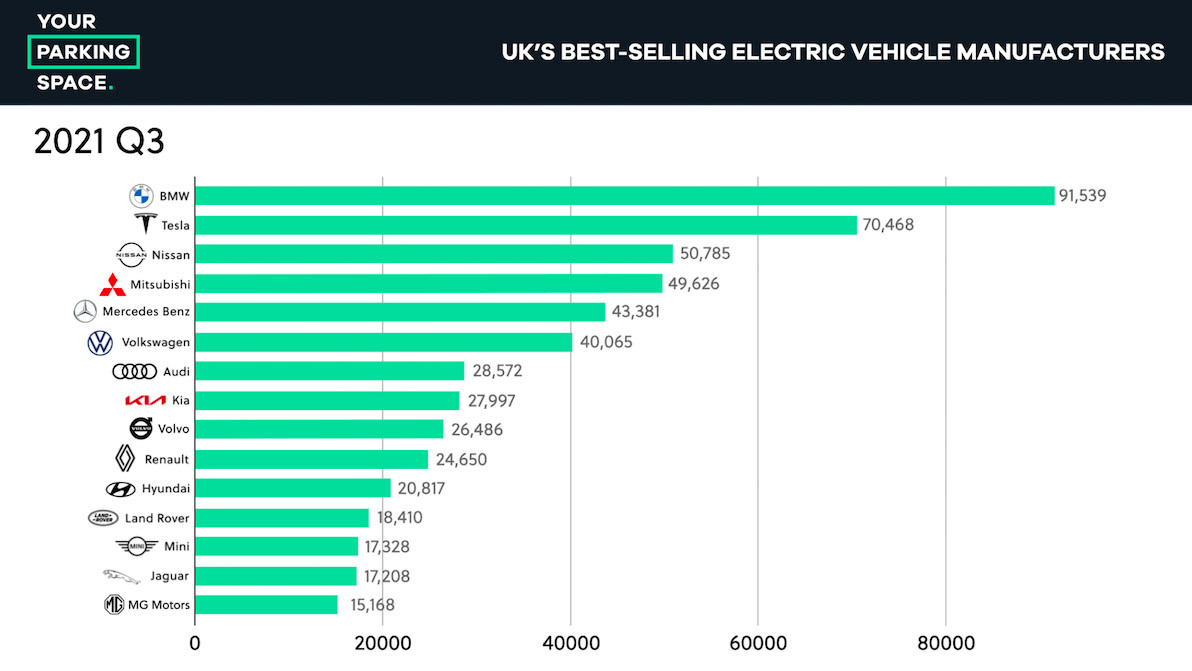 Current data is correct as of Q3 2021 - the most up to date DfT data currently available, as the department publishes figures a quarter behind each time.

With a total of 91,539 electric models on UK roads to the end of September 2021, BMW is the UK’s leading EV manufacturer to date - looking at pure-electric, plug-in hybrid, and hydrogen fuel cell vehicle registrations. It’s taken top spot through a combination of a wide selection of models on the market, plus entering the electric vehicle race early on with the likes of its i3 and i8 models.

There are currently 12 different plug-in models that feature in the DfT statistics, with at least one more model on sale at the time of publication, but too new to have had any registrations by the end of September 2021.

Having started out early on with the likes of the i3 and i8, BMW then quikly built up a solid PHEV range across core models such as the 3 Series, 5 Series, X3, and X5, before starting the second phase of its EV expansion. Recent additions include the BMW iX which entered the latest set of stats (with 19 units registered), plus the i4, which will certainly feature in the next set of figures.

Not far behind BMW is Tesla, with 70,468 models registered to the end of Q3 2021. The rapid climb up the charts is an impressive feat considering Tesla’s line-up is small - with just four models currently offered for sale or to order - one of which, the Model Y, is too new to appear on the DfT statistics.

Tesla’s strength however is that the US firm only produces electric vehicles, meaning every model that comes to the UK counts towards its total in this chart.

Having initially relied on the Model S as a mass-market model (following on from the exciting but small-scale production first-generation Roadster), Tesla has expanded its line-up with the Model Y, and the shifted to more mainstream models with the Model 3 and brand new Model Y; the latter is hitting UK roads at the time of publication, but is too new to feature in this table.

Nissan’s pioneering Leaf helps the Japanese manufacturer to third place in the charts, with the e-NV200 van and MPV boosting total registrations slightly. Group stable-mate Mitsubishi drops down to fourth place in Q3 2021, though considering the manufacturer is no longer selling new cars in the UK, this remains a strong indication of just how popular its Outlander PHEV was.

Finally, Mercedes-Benz rounds out the top 5, with the largest selection of plug-in cars available in the UK. There are currently 20 electric models on sale in the UK - six pure-electric and 14 plug-in hybrid - plus variants (saloon/estate/coupe etc) and legacy badges, creating one of the largest ranges of plug-in models around.

Tesla’s Model 3 has stormed to the top of the best-selling electric vehicle charts, having only gone on sale in the UK at the end of spring 2019. In just over two years, the Model 3 has overcome previous incumbant, Mitsubishi’s Outlander PHEV, and overtook best-selling pure-EV Nissan’s Leaf, by Q1 2021.

BMW’s popular 3 Series sits in fourth in the table thanks to a long-running and cheap-to-run plug-in hybrid powertrain, while BMW also takes fifth spot with the i3 city car.

Looking at purely electric models, the Tesla Model 3 sits first, ahead of the Nissan Leaf, Renault Zoe, Jaguar I-Pace, and Kia e-Niro completing the top five respectively.
Volkswagen’s ID.3 is particularly worthy of note, since the first models only made it onto the DfT list in Q3 2020 - in just over a year, the electric hatchback has climbed to seventh place in the pure-electric table, and tenth when factorin in PHEVs too.

However, since Mitsubishi no longer sells new cars in the UK, it is not likely to top the group table fror too much longer, despite the Nissan Leaf and Renault Zoe performing strongly. To continue to stay at or close to the top, Nissan’s Ariya will need to come along soon and start selling quickly.

Instead, by the next report for the end of 2021, there is a good chance that the BMW Group could be the best selling electric manufacturer group in the UK - and if not, it will certainly be close.

With a wide choice of models in the BMW portfolio, plus both the Mini Electric and Countryman Cooper S E PHEV counting towards group sales, the German giant will also benefit from the likes of the BMW iX SUV coming fully online, and the addition of the i4 into the registration figures, as well as general increases in sales over the rest of the range.

The Volkswagen Group is the fastest growing manufacturer however, with an increase of more than 17,500 units over Q2 2021. Compared with the almost 4,500 increase from the Renault Nissan Mitsubishi Alliance, and more than 8,500 increase from the BMW Group, VW is significantly accelerating the number of electric cars on the road in the UK, much faster than any other group.

With the likes of the VWs ID.3 and ID.4 becoming established models, plus the Skoda Enyaq iV and Audi Q4 e-tron - all of which share a platform - starting to get plenty of models into dealerships, it is of little surprise that the VW Group growing faster than any other group. Plus, the portfolio of brands includes VW, Skoda, Seat, Cupra, Audi, Porsche, and Bentley.

A name to look out for is Stellantis, with a number of factors set to start propelling it up the sales charts quickly. A wide range of pure-electric models, from popular superminis and crossovers to a large electric van offering mean brands including Peugeot, Citroen, and Vauxhall will start quickly accumulating EV sales.

On top of this, last year Stellantis merged with the FCA Group, which includes the likes of Fiat and Jeep. The Fiat 500 in particular is electric-only, and already proving a popular model both in Europe and the UK. For example, the 500 came to the UK in Q3 with 425 registrations recorded for that quarter, and in Q3, more than 1,000 new 500s had been added to the total.

When looking at pure-electric models alone, the table moves about a fair bit. Unsurprisingly, considering its entirely-EV based line-up, Tesla sits top, and BMW drops down from 1st to 8th.

Long-running models such as the Leaf and Zoe help Nissan and Renault respectively stay high up the list, though the latter’s place is under serious threat from Volkswagen after Q3 2021’s figures.

Names to look out for that are expected to climb the chart quickly in comming quarters include Kia and Hyundai as the EV6 and Ioniq 5 respectively reach drivers, BMW with its iX set to start getting significnt registrations and the i4 hitting the road, and MG as updated versions of its ZS EV and MG5 EV make it to the UK.

Tesla holds a significant lead, and continues to expand its sales quickly. On top of that, within the next few quarters, the Model Y is going to start arriving in the sales charts, further strengthening its position. However, the company is not currently large enough that a concerted effort by a leading ‘conventional’ car maker couldn’t overhaul it within a year or so, and there are plenty of names in line for expansion. The likes of Volkswagen, Hyundai, BMW, Audi, Fiat, Mercedes-Benz, and Kia look set to electrify the market going forward.